Had a walking tour of Delhi with a difference today – the Guide was a 19 year old boy who used to be a street kid. Junad our guide ran away from his home in a very remote village when he was just 10 years old and jumped on the train to Delhi. His mother was earning about 200 rupees (£3) a week and had to feed herself and 3 children. Junad spent 3 hard years living on the streets of Delhi. He was rescued by the Saalam Balak Trust and lived then in a shelter and now he is finishing his education and works part time as a guide. A real success story and I shudder when I think about what could have happened to this young man, who now is obviously so happy and healthy and loving what he is doing. His ambition is to become a tour guide.
The Saalam Balak Trust has helped over 40,000 street kids over the last 29 years and has several shelters and schools. Many kids ran away from home or were sent away or were abused or their families couldn’t support them. There are around 150,000 street kids in Delhi alone and God knows how many in the whole of India. The kids survive by begging, stealing, working on rubbish tips, prostitution ……
Many are addicted to drugs or glue.
We visited the one boys shelter where all 49 children were at one time street kids. The boys were happy and looked healthy. I found it a very humbling, moving and emotional experience and those kids gave me such a feeling of hope.

The concept of former street kids helping the kids who now live on the street is very effective. Saalam Balak has many contact points throughout the city and staff who go and talk to these kids who have to fend from themselves. Help is offered but of course some children won’t take the help as they don’t know who they can trust.
The name of the trust comes from a movie Saalam Bombay – like the story in the movie Lion but the boy doesn’t get adopted and taken to Australia. The Trust also search for the children’s parents – in fact one couple were waiting there at the shelter to be reunited with their long lost son.

Prince William and Kate have visited the trust as has Michelle Obama. 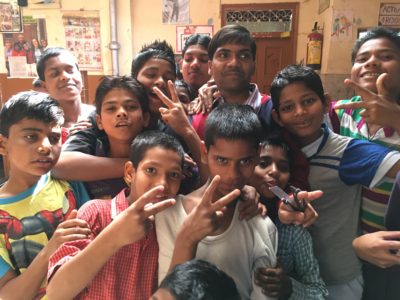 AM Travel Solutions Ltd is an Atol licence holder and is authorised to sell & advertise Flight-Only, Flight-Plus and flight inclusive package holidays.