Arrive Chennai formerly Madras
Drive to Mahabalipuram and check in to Hotel Interconinental and enjoy a free afternoon.

Enjoy Mahabalipuram, which is a beautiful beach resort which consists of a the tiny village by the sea in which all else is dwarfed by a dream world of awesome Tamil art, an open air museum of sculpture in living rock. The piece de resistance is Arjuna’s Penance or the Descent of the Ganga, the world’s largest bas-relief, 764 ft. by 288 ft. (27m by 9m). The best known landmark of Mahabalipuram, is the Shore Temple which has stood by the sea for 12 centuries. Its twin spires are pure poetry in granite. 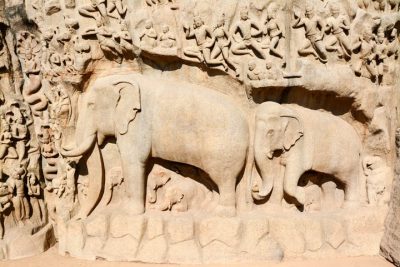 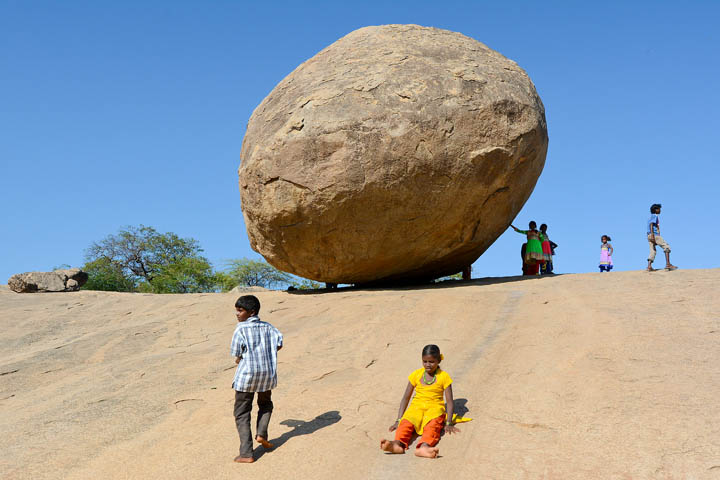 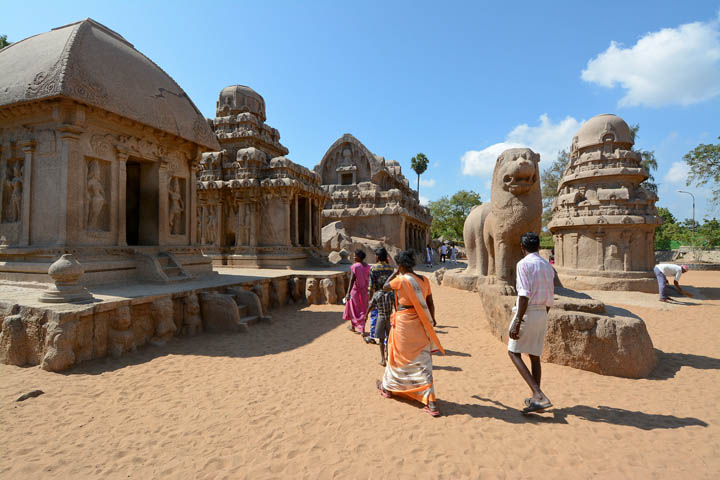 Afternoon Free  to enjoy the beach

Enjoy a drive down the coast to and visit the seaside town and former French Colony Pondicherry, setting for the movie Life of Pi. See a combination of Indian and French lifestyle and architecture. Visit the botanical gardens and enjoy the promenade. When we think of colonialism in India, we could be excused for thinking of the British empire, but the Portuguese played their part in occupying Goa as the French did in Pondicherry. See the mixture of French and Indian buildings in this former French colony, which became part of the Republic of India in 1954.  The promenade on the Bay of Bengal, with the four-metre statue of Mahatma Gandhi and so many old-fashioned ice cream and candy floss sellers are a delight.

There are policemen dressed like the gendarmes of France, small bakeries and government buildings that could have been in Paris. Appreciate the contrasts between the French and Indian styles as much as the combination of churches and temples.  Amid this was the crazy Indian traffic and buildings such as the colourful Indian temple adorned with carvings which were painted in bright colours. Lakshmi the real live elephant had her place outside the temple and was a great attraction to the devout temple goers and tourists alike. 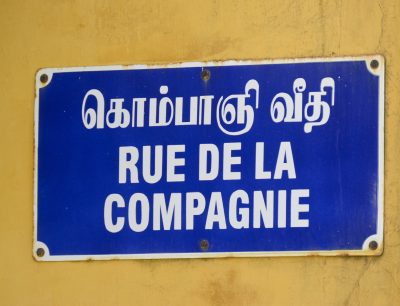 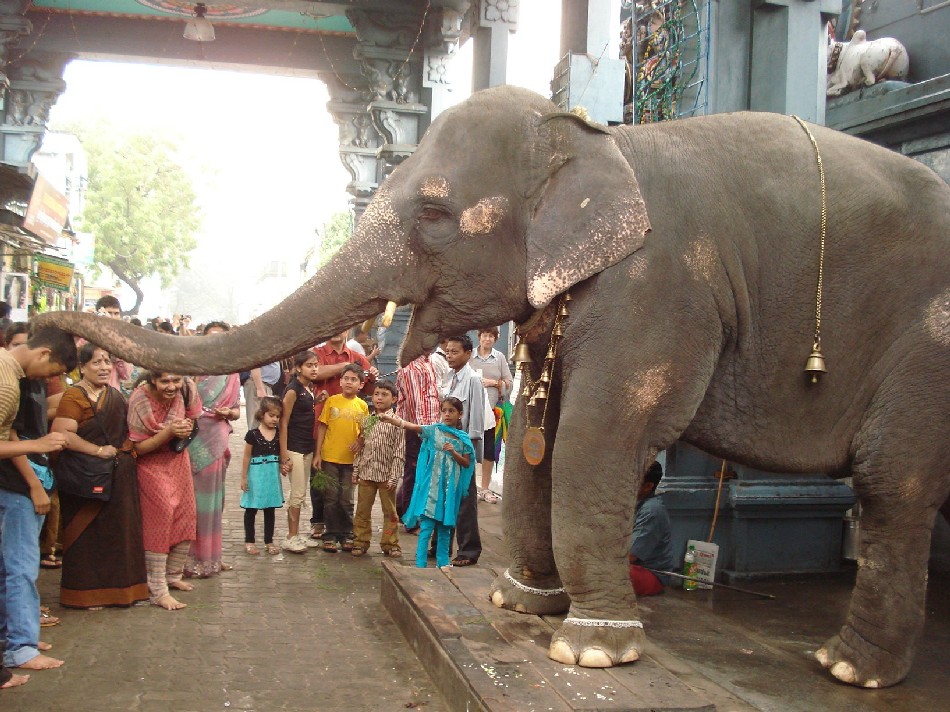 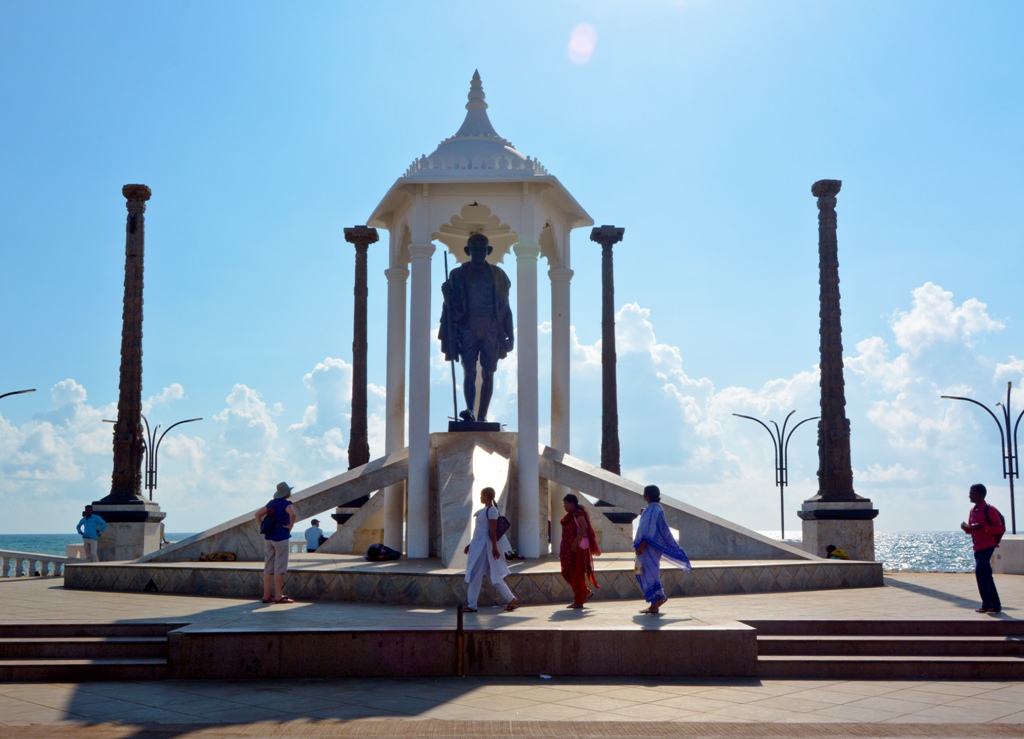 Journey to Madurai  and enjoy locals celebrating the festival of Pongal, a time when many pilgrims are out and about. The Pongal celebrations bless the farmers and the land, as crops such as rice, turmeric and sugar cane are harvested. The first day is the Bhogi festival when the Lord Indra, God of rain and Lord of Lords is celebrated. Useless objects are taken out of the home and tossed on a large bonfire made out of wood and cow dung.

The second day is Thai Pongal when rice and milk are boiled together in the open air and offered to the sun god. Special drawings are made on doorsteps. Pongal is the name of the sweet rice pudding.

Mattu Pongal is the third day and is celebrated in the name of cows, who are adorned with bells, garlands and sheaves of corn. Legend has it that Lord Shiva sent his bull, Nandi, to Earth with a message for the people that they should have a bath daily and eat once a month. Nandi the bull became confused and mistakenly told the everyone to eat daily and bath once a month. Shiva was angry with his bull, banishing him to earth for ever more saying he would have to plough more fields to produce enough food for everyone to eat daily. Hence the celebration of cattle.

The last day of Pongal is when sweet rice and other food are set out in a courtyard as part of a ritual to request prosperity.

Tamil Nadu is one of the only Indian states to celebrate Pongal. 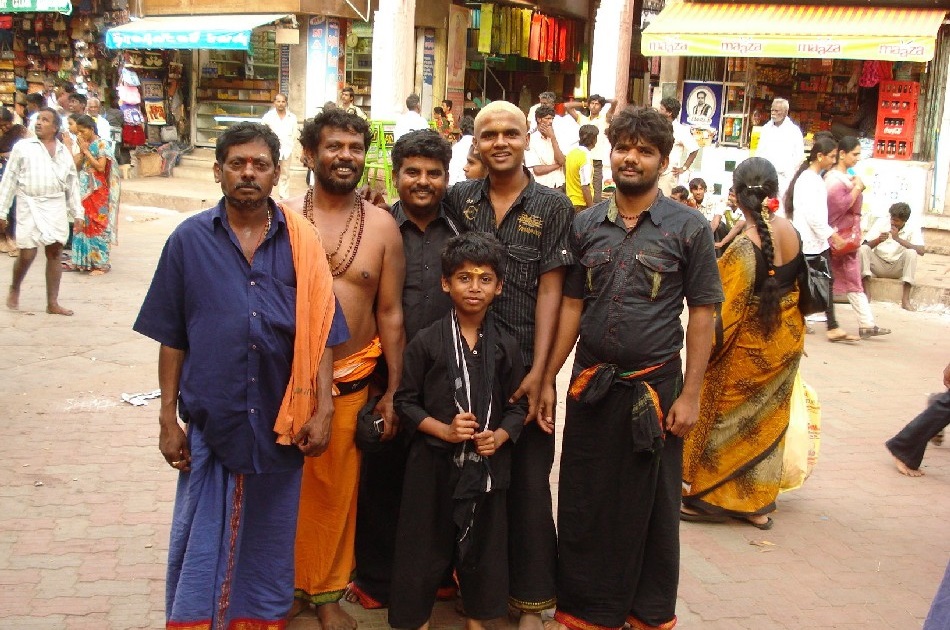 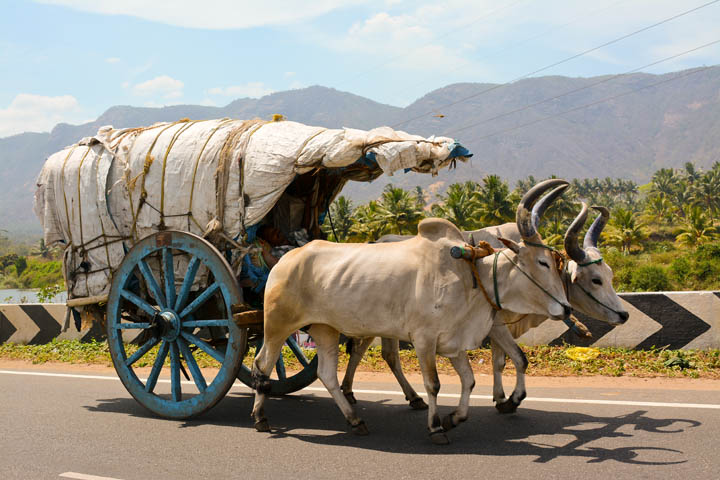 The Meenakshi Temple Complex is like a town within a town, with a wall around it and various entrance gates. It can be seen from many viewpoints because of the four towers above each gateway and occupies a total of fourteen acres. In South Indian Dravidian style the towers are adorned with colourful deities. The best views of the temple and the towers are from the roof of one of the many shops opposite the structure. From this point we can really appreciate the carvings with the detail and intricacy, with the statues of cows, Gods and gurus seeming to be staring.
It is believed that Lord Shiva assumed the form of Sundareswarar (the handsome one) and married Parvati (Meenakshi) at the site where the temple is currently located. Inside there are shrines to Meenakshi, Shiva and other Gods such as Ganesh and Lakshmi.
Enjoy a rickshaw ride through the flower market and visit the local Palace. 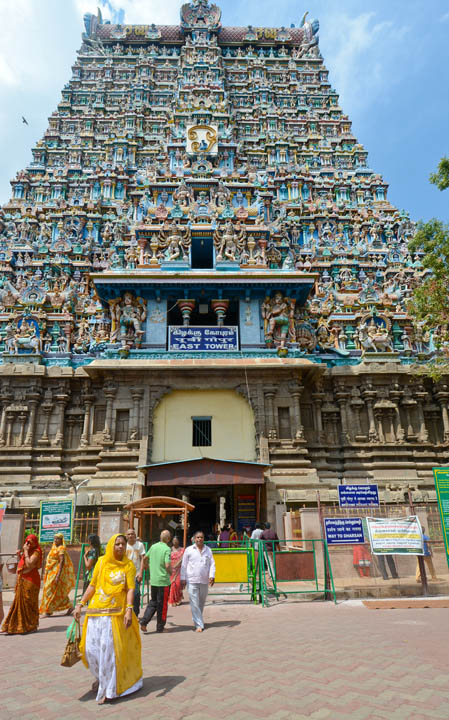 Today we travel through plantations and climb to 6,000 feet as we reach our next destination Kumily in the hills and home to many tea Plantations. Spice Garden Hotel

Tour the tea plantations and enjoy a walk through the spice plantations.

Visit an elephant sanctuary where you have the opportunity to ride and feed the elephants. Enjoy a nature walk. 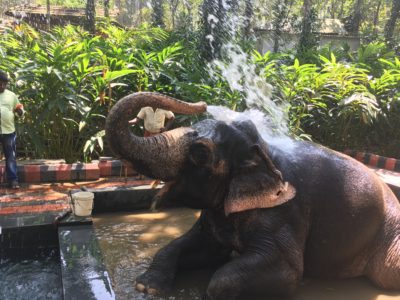 Enjoy a scenic journey to Cochin with a city tour including visits to the Chinese fishing nets, the former Jewish quarter and the cultural dance centre.

Vasco de Gama, the Portugese explorer was the first European to discover India and he died in Cochin in Kerala on his third visit. His house is still in the town and is now a bed and breakfast on “Vasco de Gama Square. There is a real international feel about Cochin which consists of many islands and was once an important trading post, with the Portuguese, British and Dutch influence. Even the Chinese traders spent time here, with their remnants being the huge fishing nets that can be seen along most of the waterways. The fishermen lower the massive nets into the water and raise them again, hoping for them to be full of fish. They exercise their fishing jugaad, as they will give a demonstration to the tourists, letting them pull up the nets, for a small fee. . Cochin is a fine example of secular India with the oldest church in India, St Francis Church where Vasco de Gama was originally buried, Mosques and temples and seven synagogues but only a handful of Jewish people. 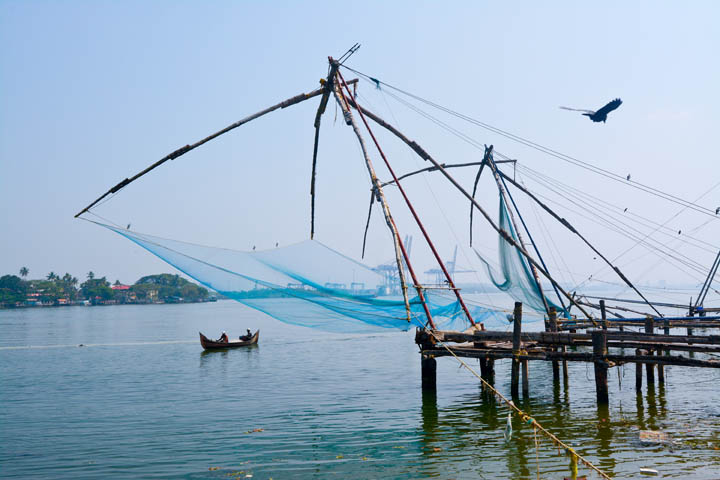 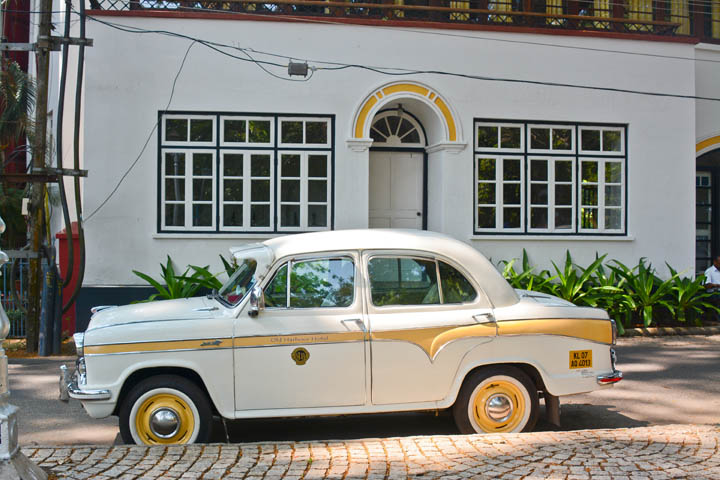 Another day to enjoy this town and a harbour cruise. 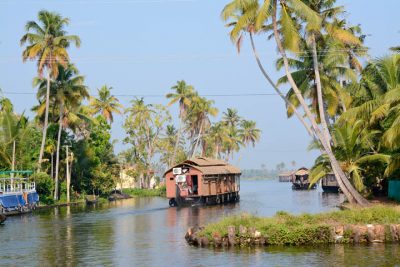 Descend to the backwaters today and join your private house boat for 2 nights enjoying this tranquil, beautiful area.

The Backwaters of Kerala are a series of lagoons, rivers, canals and lakes running parallel to the Arabian sea, with a mixture of fresh and sea water. They stretch along the inland for around nine hundred kilometres, with villages and towns scattered everywhere. Life on the water is vastly different for the inhabitants.

Enjoy a 2 or 3  bedroom houseboat each with a cook, an engineer, a captain and a host. Be spoilt with the cook being busy and constantly feeding you in good Indian fashion. It is heavenly just sitting back in the comfy chairs watching as you will pass small villages, children going to school by boat, fishermen, people cleaning their clothes in the waters, even men floating along herding hundreds of ducks, locals travelling by small rowing boats, an elephant being transported on the water and temples. The bird life is wonderful with pink storks, kingfishers and peacocks. The Malabar Grey Hornbill, The Indian Pied Hornbill, Whitebellied Treepie, many species of Drongos, Woodpeckers, Flycatchers, Babblers are regularly seen. 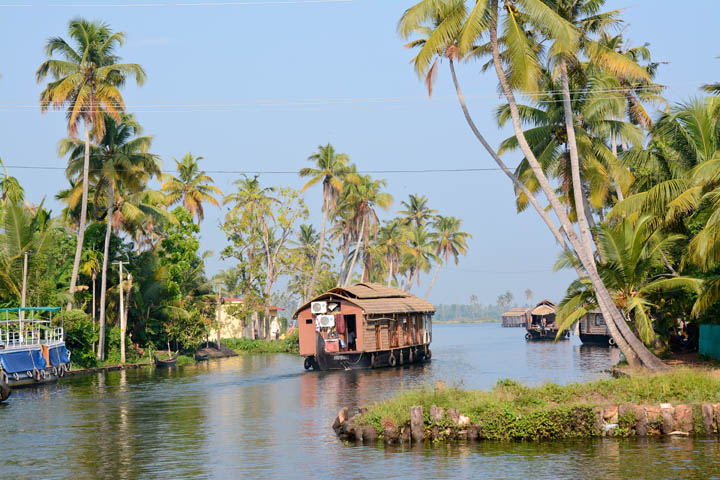 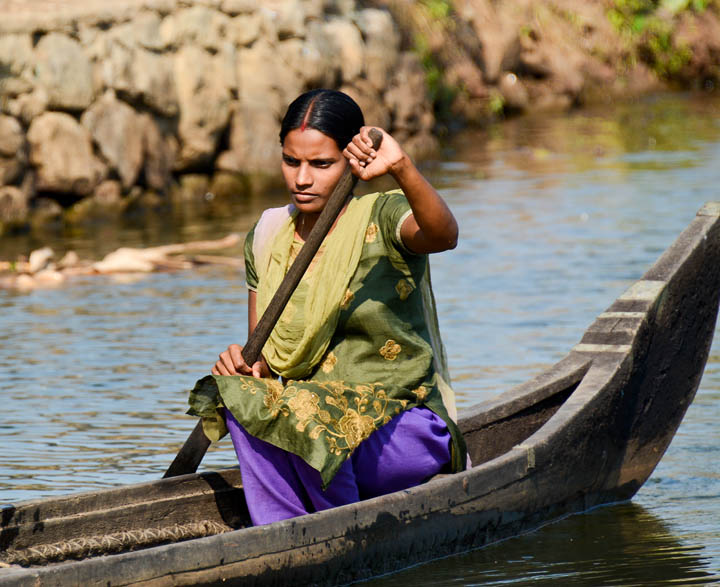 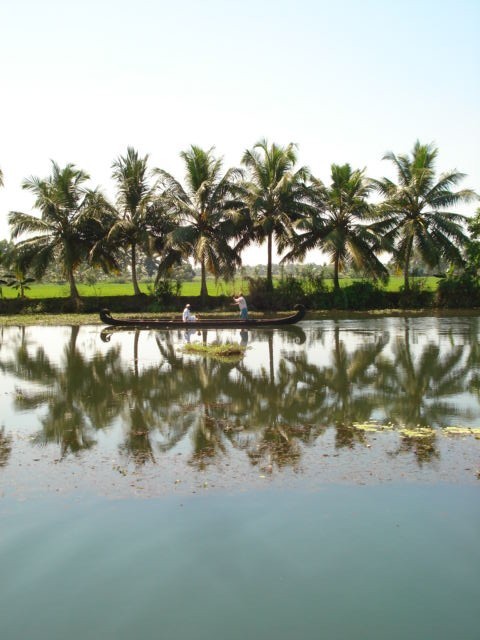 Relax for your final 3 days at the eco friendly Marari Beach Resort.

Day 17 Depart for your flight home